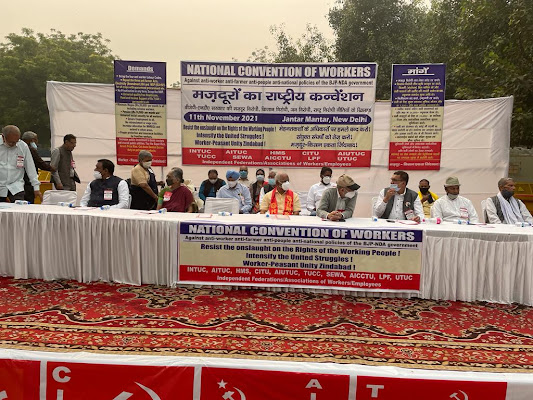 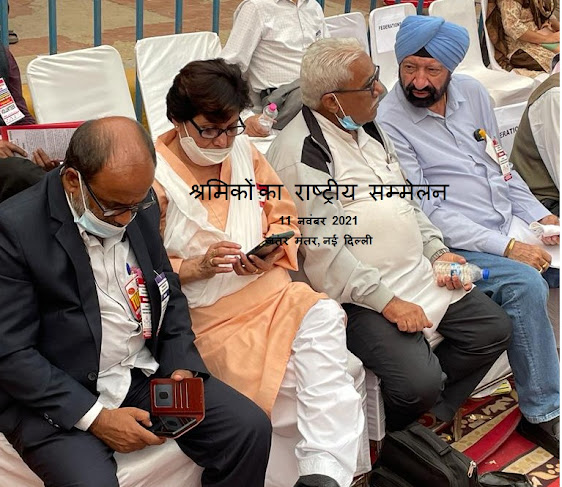 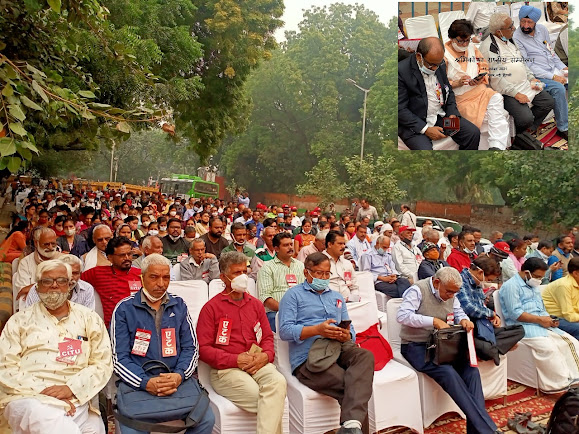 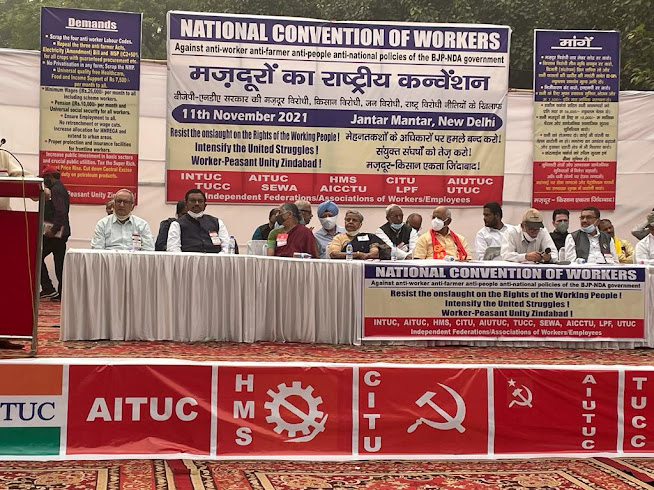 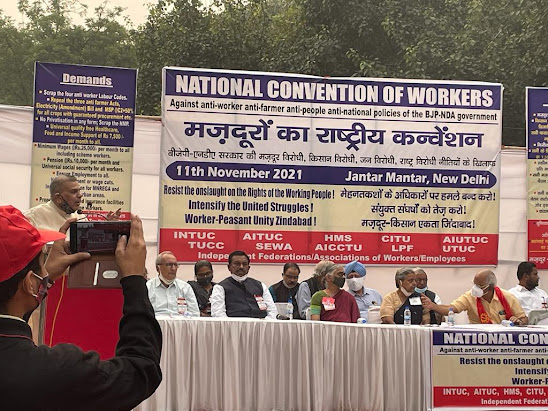 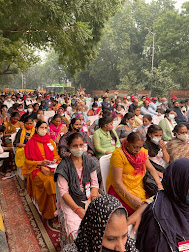 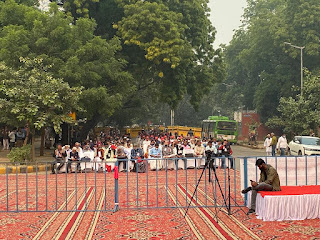 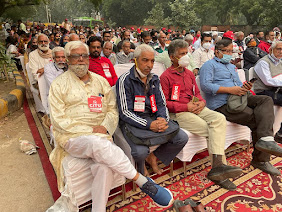 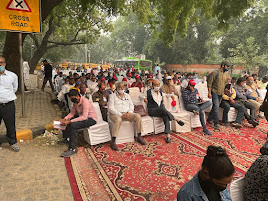 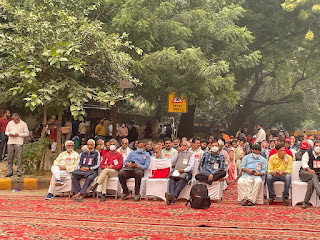 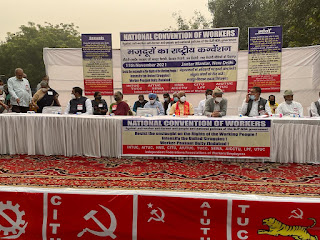 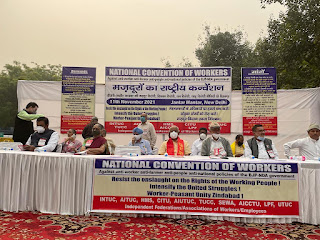 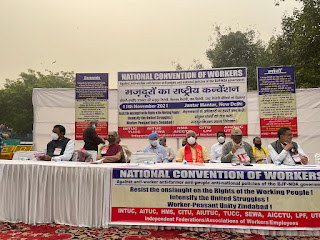 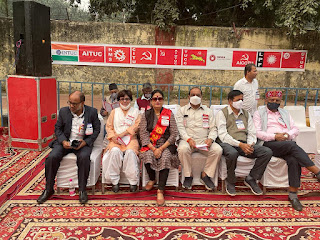 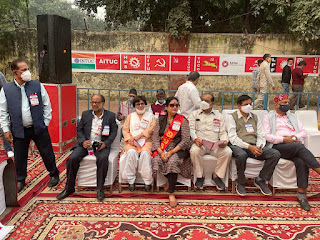 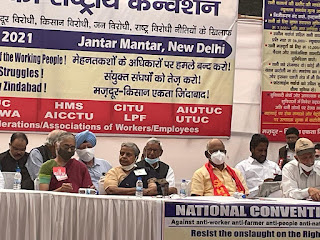 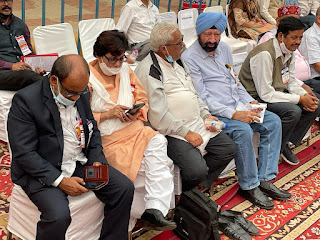 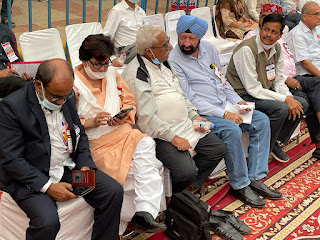 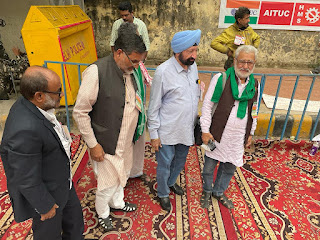 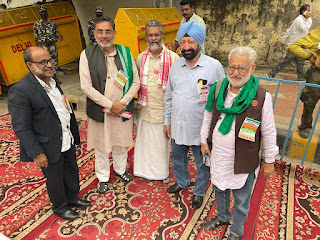 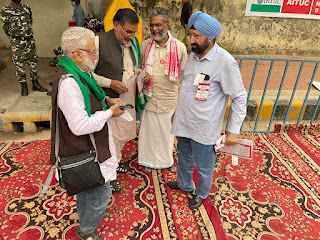 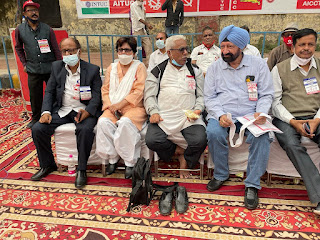 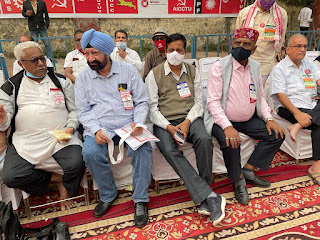 Release on National Convention of Workers was held on 11th November 2021 at Jantar Mantar, New Delhi

PREPARE FOR A NATIONWIDE STRIKE DURING BUDGET SESSION

The convention began with paying homage to V. Subbaraman, President, LPF who passed away three days ago and many tall leaders of the Central Trade Unions, Federations/Associations, prominent persons in public life, during this Covid-19 period, the farmers who died during the ongoing historic Kisan agitation for last one year, including in the recent Lakhimpur Kheri episode, and those who died because of hate crime etc.

The Convention deliberated upon the desperate pursuit of anti-worker, anti-farmer, anti–people, pro-corporate and anti-national destructive policies by the Govt. of India which has brought the lives and livelihood of the entire people and the country’s economy to the brink of disaster. The Struggle now is not only to save the rights and lives/livelihood of people but also save the country’s economy and the entire democratic system and the society as a whole from disaster and destruction being engineered by the authoritarian  forces in governance with the active support of private corporate, both domestic and foreign.

The speakers, who were the leaders of the Central trade Unions, dwelt on how the Central Government used the Covid pandemic period to push through the Labour Codes and the Farm Laws, followed by reckless privatisation drive that included outright sale of profit-making Public Sector Enterprises or leasing them out for a song, unmindful of the consequences this will have on common people – runaway price rise and lack of employment opportunities for the backward classes and youth in general. The speakers included Ashok Singh-INTUC, Amarjeet Kaur-AITUC, Harbhajan Singh Sidhu-HMS, Tapan Sen-CITU, Satyavan-AIUTUC, G. Devrajan-TUCC, Sonia George-SEWA, Rajiv Dimri-AICCTU, J.P. Singh-LPF, Shatrujeet-UTUC.

The convention was also attended by the delegation of Samyukt Kisan Morcha in solidarity with the working class.

With elections to many BJP ruled states round the corner, the Central Government is making all efforts to list their “achievements”, but they cannot wish away the ground reality, that is India slipping to 101st position in the Global Hunger Index that has listed 106 countries that have Hunger as one of the major social ills.

The reign of terror and hate that has been let loose by the gangs masquerading under various garbs, with the government conveniently looking away, is something never experienced before, that is tearing our diverse social fabric apart, which will throw back our progress by years.

The Convention reiterated the demands that have been made repeatedly such as : Scrapping the Labour Codes; Repeal of Farm Laws and Electricity (Amendment) Bill, No to Privatisation in any form and scrap the NMP; Food and Income Support of Rs 7500 per month to non-income tax paying households; Increased allocation for MNREGA and extension of Employment guarantee Scheme to urban areas; Universal social security for all informal sector workers; Statutory Minimum wage and social security for Anganwadi, ASHA, Mid-day-meal and other Scheme workers; Proper protection and insurance facilities for frontline workers serving the people in the midst of pandemic; Increase in public investment in agriculture, education, health and other crucial public utilities by taxing the rich through wealth tax etc in order to revive and revamp the national economy; Reduction in Central Excise duty on petroleum product and concrete remedial measure to arrest price rise, regularization of contract workers, equal pay for equal work, scrap NPS and restore old pension scheme etc.

The Convention called upon the Workers to take the message of down to the masses through intense activity in the states and districts, factory gates, town mandis and so on and prepare the working people and people in general to make the two days countrywide General Strike a massive success to further heighten the ongoing united struggle to “SAVE THE PEOPLE AND SAVE THE NATION”.