Participate in the G-20 meeting of Labour and Employment Ministers on behalf of International Trade Union Confederation (ITUC) at Bali, Indonesia on 13th, 14th September, 2022.

General Secretary of Hind Mazdoor Sabha, Comrade Harbhajan Singh Sidhu in a group photo after meeting of G-20 with all Labour and Employment Ministers of 20 Countries. Dear Brother and Sisters, I got the opportunity to participate in the G-20 meeting of Labour and Employment Ministers on behalf of the International Trade Union Confederation (ITUC) at Bali , Indonesia on 13th,14th September 2022. On behalf of workers, I spoke very forcefully in the meeting in response to the G-20 Priorities and commitment on the Global Issues to recover stronger Together,

My full statement is attached herewith for your information and necessary action.

I also got the chance to meet with Mr. Guy Ryder DG ILO explain the serious attacks on the workers and human Rights and Indian Trade Unions are  passing through a very critical Phase due to anti Labour Policies of Govt,44 Labour Laws are converted in to 4 Code pro Employers and anti-workers, Corporatization and Privatization of Govt and PSUs ,selling to Big Corporates and MNC on throw away prices, highest unemployment, uncontrolled Prices rise, poverty is increasing,1% population grabs 70% wealth of the country, No respect to International Labour Standards, violation of ILO Conventions, not calling Indian Labour Conference since 2015 ,No wages to workers of Covid-19 Pandemic period,200 million workers lost their jobs during COVID-19 and facing starvation due to hunger, no compensation given by Employers and Government, no jobs creation, no job security, no social security to informal sector workers, more than 70% workers are out from the coverage of Labour Laws after the implementation of Labour 4 Codes . Ten Central Trade Unions are still struggling after a six successful National Strike, five days strike in Defense, three days strike in Coal , and more successful strike in Banks , Insurance, PSUs and in the other sectors.

Railway, Defence civilians employees and Govt Employees fighting for scrapping NPS and restoration of Old Pension and against the Corporatization and Privatization,

Workers and Formers unity fighting together against the anti-workers, anti farmers and anti-Citizens Policies of Govt Etc.     Harbhajan Singh Sidhu 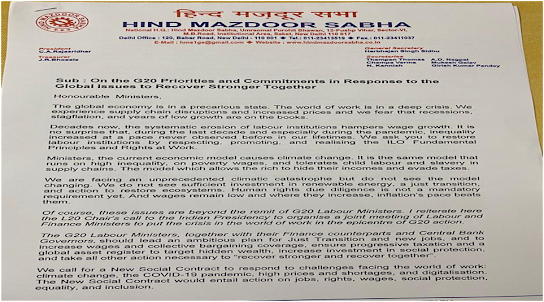 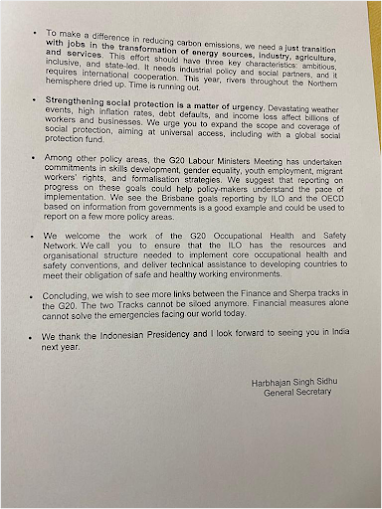