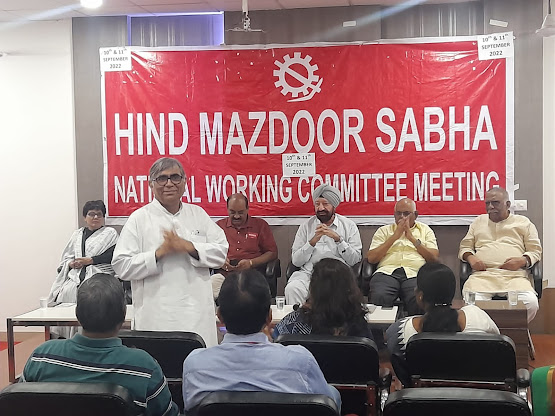 COMRADE HARBHAJAN SINGH SIDHU AND COMRADE C.A.RAJA SRIDHAR WELCOME TO ALL AFFILIATES OF THE UNIONS 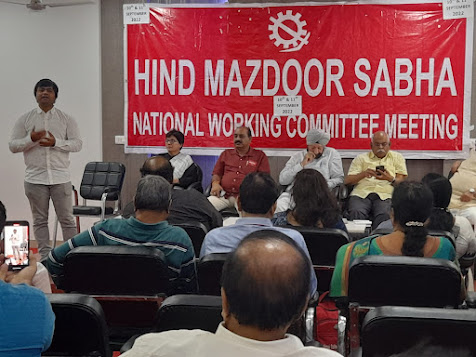 “General Secretary” Comrade Harbhajan Singh Sidhu, welcomed the president and other members and handed over to president who welcomed members and said that the meeting was organised during one of the worst ever situation of the nation and is a result of anti – workers, anti – farmers , anti – national and pro – employer policies of the present political regime. The Government has failed on all fronts no jobs, no social security, Indian rupee has gone historic low against dollar, price of petrol, diesel, CNG, LPG, rising every day, resulting heavy jump in prices of essential commodities of daily use, law and order detoriating every day, crime against women with direct or indirect involvement of people having political influence are on increase.

Minutes of the last working committee meeting were approved; followed by presentation of “General Secretary Report” General Secretary said that the country was passing through the worse ever phase on all fronts.

He also added that Government is engaged in corporatization, privatization and sell of “Public Sector” undertakings alongwith hard earned “National Assests” to private players of it’s choice on throw away prices. Our ancient, rich, composite culture based on “ Brotherhood”, and fraternity was in danger as a group within and outside ruling party is attempting a divide in the society based on “Religion, Caste, Region” etc to polarize the majority for political gains.

The Employment rate growth declining, unemployment rate touching historic height, sky rocketing prices of petrol, diesel, CNG, LPG, consequent rise in the prices of all essential commodities of daily use has made the life of working masses very difficult. With the closure of industries during corona, millions of workers lost their jobs, government provided several packages to employers to combat the corona and revival of industries but for workers despite very clear orders issued by ministry of home, followed by other ministry even payment of wages for the corona period and reinstatement of workers on the same position, no payment was made to workers, employers reviving their units are hiring hardly 50% human resources, placing them at lower status, also reducing their emoluments. This is only because employer’s having enough pressure on government.

A group having blessings, encouragement, motivation and protection from power centre is engaged in creating a divide in the society on communal basis to polarize majority to get political gain in some state scheduled to go for pole this year or next and also making ground for 2024 general elections this group has organised “Dharm Sansad” where speakers rejected “National Flag” demanded “Bhagwa Flag” and Hindu Rashtra, used unparliamentry language against father of the nation “Mahatma Gandhi”

On 15th August when “Prime Minister” addressing the nation from “Red Fort” was glorifying the women empowerment, the ruling party workers and it’s sister organizations were garlanding the 11 convicts of famous “Bilkis Bano” gang rape and murder of her 3 years old daughter  in presence of 5 months pregnant Bilkis Bano. They were given life imprisonment which was upheld by Hon’ble Supreme Court. These convicts were released from prison on the recommendations of Gujarat State (the home state of both the Prime Minister and Union Home Minister) after serving 14 years sentence in jail. They were offered sweets and were termed as “Sanskarik People” by those welcoming them.

On political front the ruling party using all arms in it’s harmony to win the elections these include misuse of Government, machinery, Government agencies like :- Income Tax, CBI, Enforcement Directorate, IB, NIA, Narcotics Bureo, Election Commission, optimum use of muscle and money power is done by luring, terrorizing, threatening the members of opposition. We have seen such attempts in Goa, Madhya Pradesh, Rajasthan, Maharashtra, Karnataka, it failed attempt in West Bengal, etc. We have to oppose such attempts to save Democracy, Public Sector, Constitution and the Nation.

General Secretary appreciated the role of all affiliates in combating the covid 19 pandemic and providing their level best assistance to millions of workers who were standard on road with sudden announcement of lockdown, no means of transport was available to reach their native place.

In Telangana State the state committee was formed for the first time after carving of the state HMS Kerala State Council also organised various activities and could get strong sport from other organizations similarly Karnataka state also working excellently.

State Secretaries presented their report, mentioning their activities, challenges faced and how the challenges, were won . In Tamil Nadu even District Conferences were held with great zeal and enthusiasm other state councils barring few have performed excellently.

General Secretary discussed the issue of increasing financial burden on HMS on account of Maintenance of National Head Quarter, He also provided details of attempts made to get a permanent electricity meter, Supply of water from Delhi Jal Board, Completion Certificate from DDA / South Delhi Municipal Corporation. Working Committee unanimously authorized to General Secretary, Hind Mazdoor Sabha with full power to negotiate with the concern authority and get it done. He also adviced to finalize the Nationwide HMS independent Action Plan

The members reported that “Trade Union Members” activist were facing harassment on the hands of employers and local administration.

Meeting ended with vote of thanks. 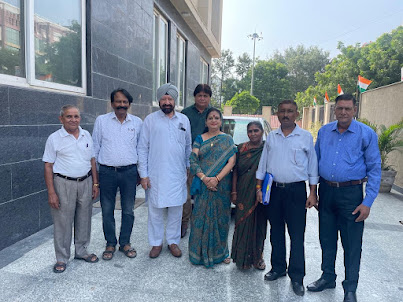