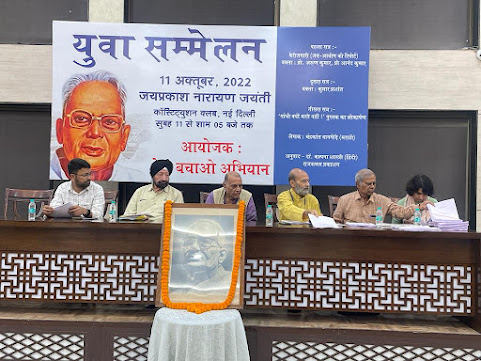 It is my proud privilege to be a part of today’s event, I express my hearty gratitudes to the organizers to provide me an opportunity to offer my respectful tributes to the Vetern leader Jaya Prakash Narayan on his birth anniversary and to express my views.

Jaya prakash Narayan also known as J.P. or Lok Nayak a great freedom fighter, Sarvodaya Leader, Socialist who changed the country’s political scenario  through “Sampurna Kranti” movement, an initiative against undemocratic rule of the then “Prime Minister Indira Gandhi with the slogan “ “Singhasan Khali Karo, Ki Janta aati hai.””. Which got tremendous response from all sections of the society.

Jaya Prakash Narayan was born to Harsu Dayal and Phul Rani Devi on 11th October, 1902 in village Sitab Diyara in Ballia District the them United Province,  present (Uttar Pradesh). The place is now known as Jay Prakash Nagar. His father was a junior official in Canal Department of State Government, he had to leave for Patna for enrollment in class 7, when he was only 9 years old, stayed in Saraswati Bhawan, where he came into contact with Krishna Singh the first Chief Minister of Bihar, Anugarh Narain Sinha first Deputy Chief Minister of Bihar and others who became Bihar’s future leaders.

He married Prabhavati Devi, Daughter of Braj Kishore Prasad, Prabhavati Devi was herself a freedom fighter who on the invitation of Gandhi ji decided to stay at Sabarmati Ashram, Ahmedabad as inmate

Jaya Prakash Narayan was swept away by Abdul Kalam Azad’s speech against Rowlett Act of 1919 calling youth to leave English education J.P took it by heart and left Bihar National College with just 20 days before examinations and joined Bihar Vidhyapeeth, the college founded by Rajendra Prasad becoming among first students the age of 20 he reached California for higher education, to meet the expenses he had to pick and pack grapes, washed dishes, worked as mechanic at a grage, at slaughter house. It provided JP the insight in the difficulties of working masses.

After a semester studying Chemistry at U.C Berkeley J.P had to get himself transferred to the University of Lawa when fees of Berkeley were doubled. In Wisconsin, he was introduced to Karl Mark’s Das Capital and other books by Indian authors including M.N. Roy which turned him towards Marxism. He did his M.A Sociology from University of Wisconsin and BA from Ohio State University.

He returned India in 1929 as Marxist and joined Indian National Congress on invitation by Jawaharlal Nehru and Mahatma Gandhi as his mentor.

After his release he formed “Congress Socialist Party” a left wing group within the congress with Acharya  Narendra Dev as President and J.P himself as General Secretary.

Jaya Prakash Narayan held the post of President of All India Railway Men’s Federation between 1947 and 1953.He led the movement against Price rise, Inflation, Unemployment, lack of supply in late 1960s also led Nav Nirman Movement of Gujarat in Bihar in 1974, Bihar Government used force on “Demonstrators” on 18th March,1974 killing eight persons J.P. led a silent procession at Patna.

He led the student movement the same year which turned into people’s movement. He formed citizens for Democracy in 1974 and people’s union for civil liberties in 1976 both NGOs to uphold the civil liberties.

Emergency was declared, opposition leaders along with dissents within party were arrested.

He was awarded Ramon Magsaysay Award in 1965 for “Public Service” Rashtra Bhushan Award of FIE foundation, Akaranji  and Bharat Ratan (Post humous) in 1993 the highest civil award given for public service.

After Independence he alongwith other congress leaders formed Praja Socialist Party in 1952. In 1954 he announced that he would thenceforth devote his life to Bhoodan Yojna Movement founded by Vinoba Bhave which demanded that land be distributed among the land less. He was very instrumental in persuading the renounced dacoits for change of heart and mass surrender to return to main stream.

The Nation is at present passing through one of the most difficult situation where the “Union Government” and some of the “State Governments” headed by same or similar political dispensation are bent upon to tarnish the image of the country made through decades long hard work within and outside the country. It is engaged in most undemocratic, unconstitutional activities completely, in violation of our constitution and International obligations. 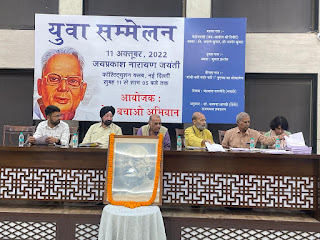 The teaching of J.P are more relevant today, we should make all efforts to mobalise all socialist and other like minded people to come together and fight against this reluctant Government. 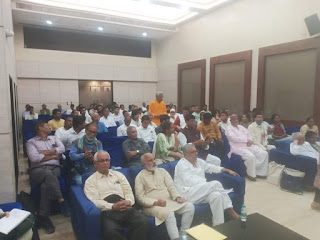